The  calmness of the room was like that of a library.  With the exception of the humming of the gym lights and the heavy breathing that was going on, not a peep could be heard.  If anyone were to walk in at this moment, they’d be truly amazed.  How could a gym filled with all these 2nd graders be this quiet?  Especially when only a few seconds earlier, the place was buzzing with kids flying around the room, screaming, yelling, and competing like a bunch of crazed hyenas?

The answer was simple.  These kids were still competing, but competing for something far greater than winning a silly PE game.  You see, the students who behaved the best during class and lined up the quietest when class was over would be rewarded with one of the most sought-after prizes in all of Windsor…

It was truly heartwarming for me to see the joy these kids would exhibit when I announced who earned lunch with me at the end of class each day.  I was dumbfounded that someone could be so happy just because they’d get to sit with me (and about 5 other students) for about 15 minutes while they ate! 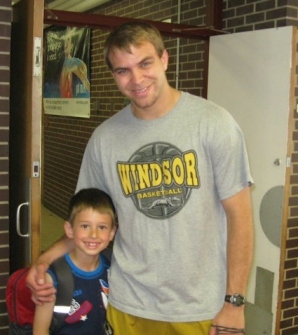 “I behaved really good today, why didn’t you choose me?!?”

This is what I love and miss about teaching elementary.  Kids at that age are so full of life, hope, and joy. They think the world is full of goodness, they believe in things like Santa Clause, the Easter Bunny, and miracles.  They believe they can achieve anything in life and will trust almost anybody to do the right thing and look out for their best interests.  They haven’t yet discovered the harsh reality that the world is broken and that people can’t be trusted.  They don’t yet know that humans are full of sin and are capable of doing terrible things.

This is what is so heartbreaking about the tragic events that occurred last Friday in Connecticut.  These precious kids–so full of love, hope, and joy–discovered this terrible truth about the world in the most harshest of ways.  20 of these kids lost their lives as a result of this tragedy, while others lost their positive outlook, their belief in good, and even their childhood.

Many who weren’t even involved in the incident have now claimed to have “lost their faith in humanity.”

I say that’s a good thing.  For faith in humanity will undoubtedly fail us.

Put your faith in God, who is now holding each of these 20 children in His arms and is outraged and heartbroken over this unthinkable tragedy.  A God who cares too much about these children to let those responsible not be held accountable.  And likewise, a God who cares too much to allow us to be okay with sin, with tragedy, and with the brokenness in our own lives.

I don’t know why God allowed an event such as this to happen, but we can take comfort in the fact that God Himself came down and suffered on the cross to save us from the sinful nature that lives deep down in all of us.  He knows suffering, shares in our suffering, and will not stand by and do nothing about suffering.

As for me, I lost faith in humanity a long time ago.  And it’s mostly because of the one human I know best:  Me.

I’ve hurt far too many to ever be deemed worthy of anyone’s faith.  I’ve taken when I should have given, I’ve put down when I should have lifted up, and I’ve attacked when I should have embraced.  I’m not even worthy of my own faith, let alone anyone else’s!  Thankfully, there is a God who is worthy of our faith, who is perfect and just, and who promises to cast our sin as far as the east is from the west (Psalm 103:12).

I’d say if there’s one thing we can learn from this tragedy it’s to go ahead and lose faith in humanity.

How about we give it to someone who is worthy?

One thought on “Teaching Elementary”