What Is Stopping Me?

Many of us know the meaning of what Jesus is telling us here–that the world hated Him, hated what He stood for, and severely persecuted Him because of it.  What most of us (including myself) don’t understand, however, is what this should look like in our own lives.  Is our faith radical and passionate enough to make this type of impact on the world?

Or does the world think:

“He keeps his faith to himself and surely won’t share it with others.  He won’t shed light into darkness; he won’t fight for what is right; he won’t do what God calls him to do.  He enjoys too much what I offer–comfort, security, and material possessions.  There’s no need to go after him–he’s NO THREAT to me.”

I want to introduce you to a man who the world knows is a threat.  A man who is suffering like Christ suffered.  A man who’s not afraid of the persecution the world has to offer.  A man who has the courage I only wish I could obtain…

Pastor Saeed Abedini is a role model and inspiration to us all.  He could have stayed in Idaho working his comfortable pastor job while enjoying a pleasant life with his family.  Instead, he decided to use his life to show Christ’s love to those who desperately need it the most–the religiously suppressed orphans in Iran.  He went to a place he knew despised Christ’s message to the point where he could be imprisoned, tortured, and even executed for spreading it. 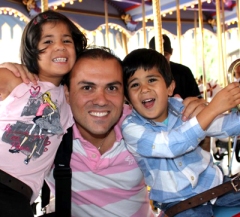 (I highly recommend the book Jesus and Muhammad for a powerful,eye-opening account of the persecutions going on in the Middle East–the story brought me to tears)

This type of sacrifice makes no sense to the world:

Why would you ever leave the comfort and happiness I provided for you in America just to help these hopeless orphans?  Do you really think you could have made a difference?  I told you following that Jesus fellow is a fool’s errand!

These are the types of thoughts that keep me from taking such action and convict me of my lack of faith.  For if this man is willing to take such a powerful act on Christ’s behalf, what is stopping me from doing things that are far less “threatening” here in America?

What is stopping me from sharing my faith with my non-Christian friends?

What is stopping me from getting off the couch and serving those in need?

What is stopping me from living the complete and full life Christ calls me to live?

Ironically enough, what we often see as negative and scary, God sees as glorious and praiseworthy:

“Blessed are those who are persecuted for righteousness’ sake, for theirs is the kingdom of heaven.”–Matthew 5: 10

I want to trust like this, but this type of faith doesn’t just randomly appear because we hope it will.  It takes being intentional in listening to God, focusing on what He wants from us, and being willing to go wherever He calls.  My prayer is that I’ll be faithful enough to allow God to work within me in this way, but it starts with commitment.

Won’t you commit with me?