Recently, I had the privilege of being a part of the Liberty Christian Fellowship basketball team in the local adult men’s league here in Liberty.  We’re a very tight-nit group that really enjoys playing together, and each of us brought a unique and special attribute to the team that helped us achieve to our maximum potential.

Our most talented scorer was easily Drew Mathews.  Drew is the Associate Pastor at LCF and is an extremely dynamic and explosive offensive player.  Drew developed his offensive prowess during his time at William Jewell College where he became an All-American performer for coach Larry Holley.  He has a very strong post game to go with a deadly outside shooting touch that he gets off as quick as a lightning strike.  Once Drew gets going, he’s extremely difficult to stop!

I, on the other hand, am much more of a defensive minded player.  In high school, I was often given the assignment of guarding the opposing team’s best scorer and I took a lot of pride in this role.  I eventually tied the school record for charges taken in a career and am now currently the defensive coordinator for the Liberty High School varsity basketball team. 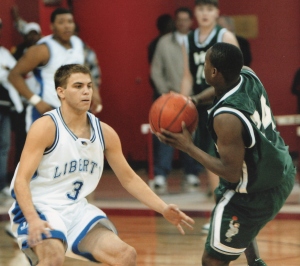 During this past season, we decided to build our team around each of our different player’s individual strengths.  Drew led the team in scoring as we often worked our offense through him.  And I focused my efforts primarily on the defensive end–doing the less glorious, yet just as essential “dirty work” that needs to get done for a team to be successful.  Additionally, the rest of my teammates also had their own unique talents they brought to the team and did a great job in recognizing their role and incorporating it effectively to benefit the team.

Similarly, we as Christians have our own individual roles God has put us on this earth to perform as a part of His team:

God has given us all different gifts and passions, and He expects us to use those gifts for His purposes.  Then and only then, will we be utilizing our gifts to the maximum extent to which they were made for.

When we begin using our gifts solely for our own purposes, that is when we become unappreciative and can easily begin comparing our gifts against others’, which will  inevitably lead to jealousy and dissatisfaction.  For example, I could’ve easily looked at Drew’s more glamorous role of being our team’s leading scorer and decided I wanted his role instead.  I could have started demanding the ball, shooting more than necessary, and arguing with my teammates when they questioned my selfish decisions.  This would’ve only hurt our team and would have caused us to achieve less than what we could.

The Bible addresses this scenario as well…

Thankfully, I (along with the rest of my teammates) resisted the temptation to look out for just our own individual interests and performed our roles without ever causing a disruption to the chemistry of the team.  And in the end, my team went on to win the Liberty Recreation Championship, coming from behind late in the championship game in which we were behind 12! 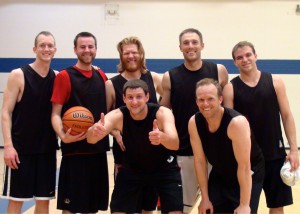 Sports provides an avenue for all of us to learn life lessons from something we love doing, and one thing all of us can learn is how to sacrifice our own interests for the good of the team.  I preach this idea to the teams I coach, because I know how essential it is for a team to be successful.  Not everyone can be the leading scorer or the best ball handler or the dominant big man inside, but everyone can contribute to the team by recognizing their role and performing it to the best of their abilities.

I believe this happens best when we follow the following process:

1)  Recognize your own strengths/weakness

2)  Recognize the strengths/weaknesses of your teammates

4)  Perform your role with a positive attitude and to the best of your abilities!

As Christians, we need to follow a similar process in our own lives.  What strengths has God given you to perform for His purposes?  What are the needs in your community and/or on your “team”?  How can you best utilize your strengths to make the most powerful impact on this world on behalf of Christ?

Whatever your role is, I encourage you to be honest with yourself about it.  Maybe it’s a glorious role that gets lots of recognition and praise.  Or maybe it’s a “behind-the-scenes” role that gets very little attention.  Regardless, know that God sees your heart, recognizes your efforts, and knows that everyone’s role is essential to bringing the love of Christ to a world in need.

And as the great Tony Horton (P90X exercise instructor) has said on countless occasions, the only thing left to do from there is to…

“Do your best and forget the rest!”