Shout Out to a Legend

This past week marked the beginning of one of my favorite times of the year:  basketball season.  It’s always exciting to see all the players come into the gym to embark on another memorable journey together, and every year it reminds me of why I love coaching so much.

I think legendary football coach Steve Spurrier said it best when he stated, “I coach because it beats workin’ for a livin’.”

Now it would be naive to think that there’s no work involved with coaching, but I must say that the work we coaches have the privilege of undertaking is extremely fulfilling and rewarding, and I’m thankful everyday that I get to be apart of it.

As a way to kickoff the season, I wanted to recognize one of the greatest coaches of all-time and someone who has definitely had an impact on me:  Coach John Wooden. 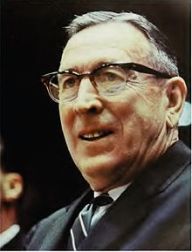 Coach Wooden’s resume is second to none.  He won a remarkable ten NCAA championships in a span of twelve years–an unprecedented feat to say the least.  Within that time period, his team won 88 consecutive games and he himself was named national coach of the year six times.  To say Coach Wooden was a great coach would be a severe understatement!

Surprisingly enough, it isn’t Coach Wooden’s amazing on-court accomplishments that have inspired people the most, but his commitment to faith, priorities, and a life beyond the game that has made the biggest impact.

Coach Wooden is well-known for his many books he has written as well as his “Pyramid of Success” (shown below) that he created to direct people on how to be successful at life as well as basketball.

He is also well-known for his many inspirational messages on how to be the best you can be.  Some of my favorites include the following:

“Make each day your Masterpiece.”

“Don’t worry about being better than somebody else but never cease trying to be the best you can be.  You have control over that–not the other.” 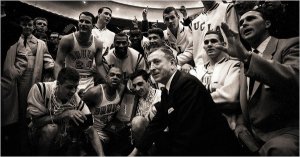 Obviously Coach Wooden knew a lot about how to achieve great things in this life, but what was most important to him was his devout relationship with the Jesus Christ.  And he wasn’t afraid to show it…

“If I’m ever accused of being a Christian, I hope I’m tried and convicted.”

“I always tried to make clear that basketball is not the ultimate.  It is of small importance in comparison to the total life we live.  There is only one kind of life that truly wins and that is one that places faith in Jesus Christ.  Until then, we are all on an aimless course that runs in circles and goes nowhere.”

Coach John Wooden was a great coach, but more importantly, he was a great man who was an outstanding role model for all on how to live life passionately and with the right perspective.

Thanks go out to Coach Wooden for making such a huge impact on so many people–including myself.